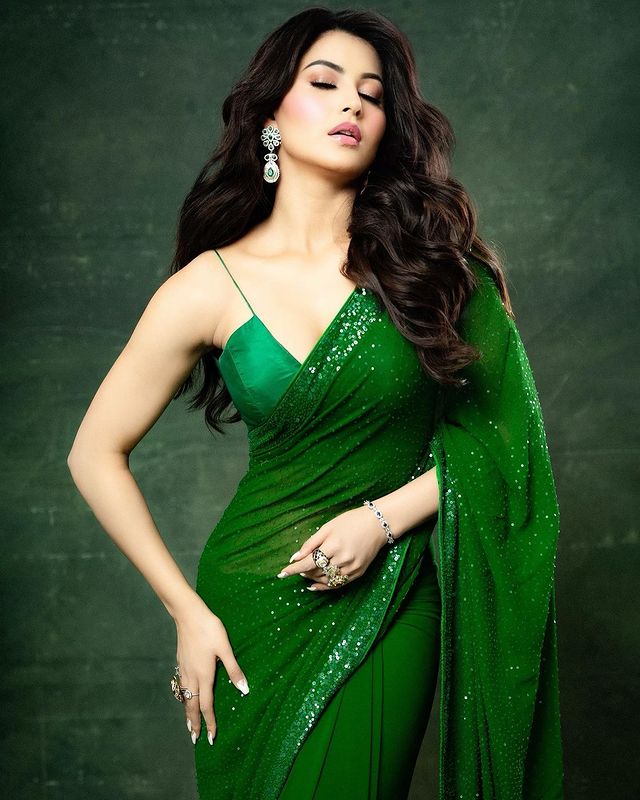 Urvashi Rautela is Bollywood’s youngest superstar and is currently the talk of the town because of her appearances and making India proud at each level. Urvashi Rautela is the girl who’s got a handle on her global fame and international brand. With 69 million followers on Instagram, she’s the most followed Asian actress on social media. She is one of the most loved celebrities globally. She has become a force to be reckoned with internationally.

Glam queen Urvashi Rautela makes a stunning style statement with each of her appearances. The Miss Diva Universe carries both traditional and western outfits with panache, but this Indian outfit she recently donned has just made the audience go insane behind her beauty.

Urvashi, who adores Indian wear, especially Saree, Recently, the actress shared photos of herself posing in a green sequin saree from ace designer Ranbir Mukherjee, where she teamed up her saree with a hot blouse. With this halter neck blouse the actress made sure to flaunt her curvaceous body, this six yard dress flaunted her toned figure effortlessly, which made her look vibrant and elegant. Urvashi looked her vibrant best with perfect Versace earrings , bracelets, and rings accessories went off pretty well with her entire look. With makeup, including winged black eyeliner, heavy mascara on the lashes, shimmery eyeshadow, flushed cheeks, and on-point high lighter, perfect contour, and pink lip shade and her tresses left open in loose curls with a middle partition made her look no less than a million bucks.

Urvashi Rautela flaunted her hourglass figure in that sequin sparkly saree and looked radiant. And we just couldn’t take our eyes off.

On the work front, Urvashi has recently signed a film with Pushpa 2 Director along with south superstar Chiranjivi in an action entertainer “Waltair Veeerayya”. Urvashi will be seen in ‘Inspector Avinash opposite Randeep Hooda. She is also making her big Hollywood debut along with 365 Days star Michele Morrone, which will be produced by Netflix, Tomasz Mandes, and will be directed by 365 Days director Barbara Bialowas. The actress is going to play the lead role in a William Shakespeare bilingual thriller ‘Black Rose’ based on the Merchant of Venice, along with the Hindi remake of the superhit ‘Thiruttu Payale 2’ and has also signed a three-film contract with Jio Studios and T-Series. Urvashi will also be seen opposite international superstar Jason Derulo in her next international music single